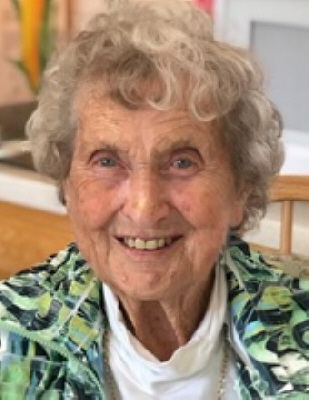 HAMILTON: Betty Reid Gallik was born May 13, 1924, in Dannemora, NY. She was predeceased by her parents, Mary (Gillmett) Reid and Thomas James Reid, and her six sisters, Regina, Uneatta, Consuela, Avedia, Athaleen and Barbara. She was the youngest of the seven girls, most of whom attended teacher’s college. At age 10, her father retired from Dannemora prison, and the family moved to Oswego, NY. She graduated 4th in her class of 292 students and went on to Oswego State University, where she met William Gallik, whom she married in 1947. Their courtship was interrupted by WWII, but when “Bill” returned from the navy, they began an amazing life together which lasted for 73 years. Betty initially taught 2nd grade at Hamilton Central school, then later became Principal. Once children arrived, she took a hiatus from teaching but returned to her true calling for many years. She touched many lives and was often given the “challenging” students due to her unique ability to reach out and understand individuals. Betty loved games of all types, especially bridge, tennis, golf and bocce ball. She was an avid reader and encouraged education and lifetime learning. She supported her children in their many activities and rarely said no to new adventures. She never met a stranger, and made many true, lasting friendships over her long years in Hamilton.
She is survived by three children, Wayne Gallik (Jayne), Donna Dillman, and Carol Gallik-Karlson (David), seven grandchildren, Michael Gallik (Hallie), Van Gallik, Sarah Robinson (Jay), Samuel Dillman, Daniel Dillman, William Karlson (Alicia), Hannah Karlson, and five (and a half) great grandchildren. She left an amazing legacy. She passed away peacefully in her home before her 97th birthday.
A Mass of Christian burial will be held on June 5th at 2:00pm at St. Mary’s Catholic Church, 16 Wylie Street, Hamilton, NY, followed by interment at Woodlawn Cemetery, Hamilton, NY.
Contributions in her memory may be made to Doctors Without Borders at https://donate.doctorswithoutborders.org/medicalcare/donatenow; The Hamilton Lions Club; St. Mary’s Catholic Church, 16 Wylie St. Hamilton; or the Lemko Association at www.lemkoassociation.org.
Arrangements have been entrusted to Burgess & Tedesco Funeral Home, 25 Broad St., Hamilton, NY.
To send a condolence and sign the Book of Memories online go to www.burgessandtedescofuneralhomes.com
To order memorial trees or send flowers to the family in memory of Betty R. Gallik, please visit our flower store.