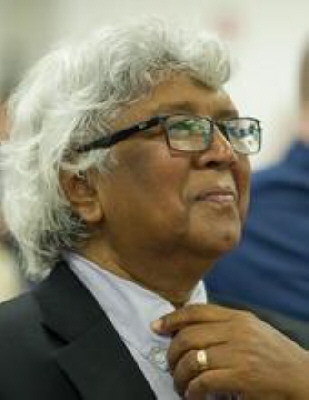 NEW BERLIN: Brown Naik,72, of N. Main St., passed away peacefully on Saturday, August 15, 2020 at his home. He was surrounded by his loving wife and daughters, who sang to him and prayed with him as he entered his eternal home.
Brown was born on September 17, 1947 in Muklingia, G. Ugayagiri, Phulbani, Orissa, India, the firstborn son of Solomon and Mondakini Naik. He was a graduate of Hubbock High School in Orissa, India; Utkal University in Cuttack, Orissa, India, where he received his BA in Oriya, Economics, and History; United Theological College in Banglore, India where he earned his Bachelor (Master) of Divinity degree; Princeton Theological Seminary, where he earned his Master of Theology degree; and Corpus Christi State University where he received a Master’s Degree in Guidance and Counseling. He also pursued training in Clinical Pastoral Education at Corpus Christi Medical Center in Corpus Christi, Texas.
On August 23, 1975, Brown married Alice Maynard at the Smyrna Baptist Church in Smyrna, NY. He was a United Methodist Minister from 1978 until November, 2019, serving churches in Gibson, Lakeside, and S. Gibson, PA, Lounsberry and Nichols, NY, and Union Center United Methodist Church in Endicott, NY (for 25 years). Following his official retirement he continued to serve the Marathon United Methodist Church in Marathon, NY for over four years more. Brown loved people and was devoted to serving them in any way he could. He was extraordinarily gifted in his relationships with people, showing Christ’s love, kindness, and joy every day of his life. He had a knack for learning names upon first meeting people and remembering their names for life. Strangers were just friends whom he had not yet met. He took special delight in introducing many of his friends to chicken curry, which he delighted in making. He enjoyed gardening, beekeeping, music, reading, and international travel. He traveled the world, including seven trips to Israel, and trips to Eastern Russia, Australia, the Baltic nations, Europe for the Passion Play, and an epic Amtrak trip across the US to visit Yosemite National Park and the Grand Canyon.
Brown was a loving and devoted husband, father of four daughters, and grandfather of ten beautiful grandchildren. His Savior and his family were his greatest joys. Surviving are his wife, Alice; four daughters, Janice (Jeremy) John of Jamaica Plain, MA; Sunita (Andrew) Groth; Laureen Naik of Washington, DC; Jessica (Tom) Ross of Abington, PA; grandchildren Micah, Simeon, and Ada John, Gabriel, Adelaide, Asha, and Eden Groth, and Rosalind, Everett, and Owen Ross, sisters, Banalata (Prasant) Digal, Saibalini (Hemant) Tandi all of Endicott; brothers, Caleb (Puspanjali) Naik of Endicott; Potel Naik of Muklingia, India; and David Naik of G. Udayagiri, India; and several nieces and nephews. He was predeceased by a sister, Surama Naik.
Private graveside services were held in the Fairview Cemetery, New Berlin.
In lieu of flowers or the Memorial Tree, donations can be made to India Mission Project Inc. Online donations can be made at https://charity.gofundme.com/o/en/donate-widget/21351. Checks can be made out to India Mission Project Inc and mailed to P.O. Box 511, New Berlin, NY 13411
To order memorial trees or send flowers to the family in memory of Brown Naik, please visit our flower store.