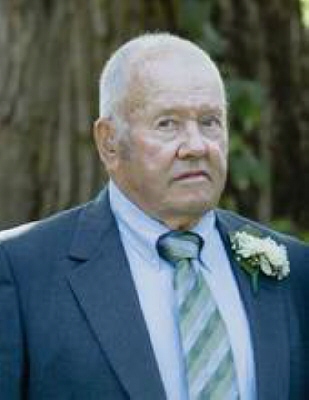 Charles Edward (Charlie) Daley of Waterville, New York, passed away on January 27, 2021. Charlie was born on December 7, 1931. He was the son of the late Clinton and Kathleen Daley.
Charlie married his high school sweetheart, Margaret “Peg” Creedon, at St Bernard’s Catholic Church in Waterville in 1951. Peg and Charlie shared nearly 69 years together before Peg’s passing in September 2020. Charlie worked for more than 40 years at Agway, and later at Growmark. Charlie was an avid outdoorsman and enjoyed many hunting and fishing trips with his friends Jay, Marlan, Bates and Hubie.
In addition to his parents and Peg, Charlie was predeceased by two brothers, Roderick and Robert, and a sister, Jean Marie Moylan. Charlie is survived by four children, Linda (and Dr. Louis) Talarico of Florida, Michael of Madison, Stephen (and Francine) of Cazenovia and Mark (and Renee) of West Winfield. “Bubba” (as they knew him) had eight grandchildren, Louis (and Audrey) Talarico, Christopher (and KrisAnn) Talarico, Megan (and Alvaro) Talarico/Arnal, Stephen (and Leah) Daley, Michael (and Dr. Jessica) Daley, Alan (and Amanda) Daley, Benjamin (and Kate) Daley and Katie Daley, as well as nine great grandchildren, Matteo, Charles and Avery Talarico, and Charles, Owen, Linden, Hadley, Anna and Jack Daley. Charlie is also survived by sisters Noreen Machold and Karen Nelson, sisters-in law Barbara Creedon and Joyce Daley, as well as several nieces and nephews.
A special thanks to Colleen and John, Johanna and Brian, and Joe and Deb for all of the care packages. Special thanks also to neighbors, Larry and Cindy Stern, for keeping an eye on Charlie, and to Ed and Sam Manion for taking Charlie hunting and to various events, including tractor pulls. A sincere thank you to the compassionate caregivers at St. Luke’s Hospital and the St. Luke’s Acute Inpatient Rehabilitation Center.
A funeral mass will be celebrated at St. Bernard’s Catholic Church. Interment will be in St. Bernard’s Cemetery. Due to the on-going pandemic, all services will be private. There will be no calling hours.
Funeral arrangements will be provided by Burgess and Tedesco.
In lieu of flowers, please consider donations to: Shriners Hospitals for Children — Springfield, 516 Carew St., Springfield, MA 01104
To order memorial trees or send flowers to the family in memory of Charles E. Daley, please visit our flower store.