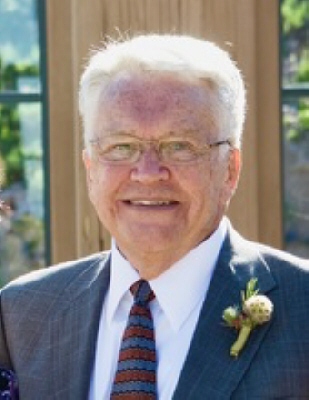 Edward C. Sitts, 84, died on February 14, 2021, at Sitrin Health Care Center in New Hartford, New York.
Ed was born in Utica on August 7, 1936, son of Camillo W. Sitts and Katherine Virginia Connolly Sitts. His mother and his dad, Pearl Floyd Davis, lovingly raised him from his early years. He had a brother, George Davis (wife Anita), of Portland, Oregon. He was a life-long Christian.
He graduated from Camden Central School and subsequently earned his B.A. in Political Science from Middlebury College, Vermont. His entire business career at Oneida Ltd. included several years as a salesman, followed by being assistant sales manager, product development manager and culminating in Vice President, Purchase Products - from which he retired in 1999. The latter position required frequent, worldwide travel throughout most of 25 years. For him it was a dream job repaid by diligent application.
Ed was still able to devote almost 30 years to a parallel career with the United States Army Reserve (USAR) as a member of upstate New York’s 98th Division (Training). He served the division in three different upstate cities: Utica, Syracuse and Schenectady. He commanded three different companies and three different battalions over the years, including the 1157th USAR School and finally the 1st Brigade of the Division. He retired from each of the last two as a full colonel.
Mr. Sitts is pre-deceased by his beloved wife of 59 years, Marcia. Their family grew to include daughter Anne and son-in-law Mark Ehrenreich, of Dallas, Texas, and their children Joshua of San Francisco, California; Samuel and wife Jessica and of Reno, Nevada and great-grandsons Bennet and Eliot; Meg and son-in-law Justin Renninger and great-granddaughters Adelaide and Remy, of Fort Worth, Texas; Jacob and wife Samantha of Texas, Mia Ehrenreich of Dallas, Texas; Tian Ehrenreich of Dallas, Texas; son David of Spartanburg, South Carolina; son Michael of Earlville; daughter Laurie and son-in-law Robert Roser and children Marty and Katie with great-grandchildren Ryan and Luke, all of Verona; daughter Karen Dawson of Lancaster, Pennyslvania, and her children Anthony of Lancaster, Crysta and great-grandson Mounir Howard II, both of Syracuse, Julian and Rose, both of Lancaster; Nadine and son-in-law Joseph (Matt) of Bouckville and their children, Kody, Tyler and Tessa; daughter Elizabeth and son-in-law Alan Johnson and their children Alana, Brandon and wife Crystal, Audbrey, and Elisa all of Utica; and Joel of Albany.
Memorial Services will be held at 11am Saturday, October 16, 2021 at St. Thomas’ Episcopal Church, 12-1/2 Madison St., Hamilton, NY followed by Interment with military honors in St. Thomas’ Memorial Garden.
Friends are invited to call at the church from 10-10:45am prior to the service.
Arrangements have been entrusted to Burgess & Tedesco Funeral Home, 25 Broad St., Hamilton, NY.
To order memorial trees or send flowers to the family in memory of Edward C. Sitts, please visit our flower store.