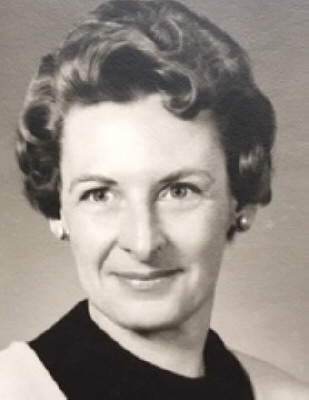 Leona M. “Lee” Lamb, 95, of Hamilton, NY, passed away Thursday, June 4, 2020 at home with her children by her side.
She was born on February 20, 1925 to Albert and Lillie Irons Riedl. She graduated from Cazenovia Central School in 1943 and married Alan “Tom” Lamb on September 23, 1944. He predeceased her on April 16, 2015 after sharing their love for over 70 years. Lee dedicated much of her life in service to others. She could often have been seen driving someone to the doctor’s office or taking someone to church who wasn’t able to get there themselves. She volunteered her time to helping out at the food pantry in Hamilton.
Lee worked at Hamilton Central School as a cafeteria monitor for ten years. The kids would always wait to hear the whistle being blown for someone doing wrong.
She was a member of St. Thomas Episcopal Church in Hamilton and served on the Altar Guild as a greeter and helped with the Norwegian Tea. She loved to play golf at the Seven Oaks golf course where she was a member for several years and enjoyed swimming at the Colgate pool. She enjoyed skiing, playing bridge with her friends, walking, gardening, cooking and baking. She was best known for her delicious baked beans and homemade strawberry jam.
Lee traveled extensively with her husband, helping him organize conventions every year in different states. They visited Scotland, Ireland and England.
She is survived by her children, Blake and Margaret Lamb of Sherrill, NY; Sandra and John Habeeb of Watertown, NY; Mark and “Myrt” Lamb of Moncks Corners, SC. She is also survived by two brothers-in-law, Dick Lamb of Morrisville, NY; Keith (Norma) Lamb of Eaton, NY; other sisters-in-law, Beatrice (Lamb) Little of Pine Woods, NY and Ann Lamb of Clifton Park, NY. She especially enjoyed her grandchildren, Blake Lamb, Jr., Devra Carr, Juli Lamb, Amy Hilliker, Kerri Hoffman, David Lamb, Kevin Lamb, Mark Lamb, Jessica Svagerko, Michael Lamb, Frank McMullen and Mark McMullen. She also had 24 great-grandchildren, 4 great-great-grandboys and 25 nieces and nephews.
She was predeceased by her brothers and sister, Albert and Eva Riedl, Sid and Marcia Griffin, Harry and Lita Riedl, and a sister-in-law, Marge Riedl and her in-laws, Louie and Betty Lamb, Darwin and Marion Lamb, Gene Lamb, Gene and Phyllis Hansen, Llewellyn, Jr. and Agnes Lamb.
Calling hours will be private at the convenience of the family.
Graveside services will be held Tuesday, June 9, 2020 in the Woodlawn Cemetery, Hamilton, conforming to the current health regulations.
Contributions in her memory may be made to the Madison Fire Department, Fountain Fire Co. #1 of Hamilton; S.O.M.A.C., or St. Thomas Episcopal Church.
Lee’s family wishes to express their sincere thanks to the staff of Hospice and Palliative Care, and all her other caregivers for the wonderful care shown to Lee.
Arrangements have been entrusted to Burgess & Tedesco Funeral Home, 25 Broad St., Hamilton.
To order memorial trees or send flowers to the family in memory of Leona M. Lamb, please visit our flower store.