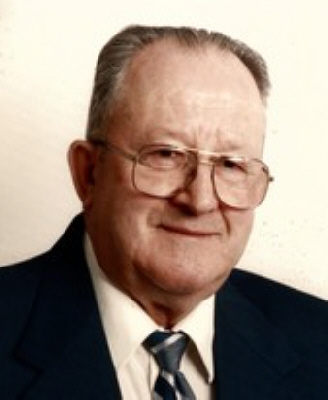 Robert L. Vair, 87, of Route 20, passed away Tuesday October 20, 2009 at the Crouse Community Center, Morrisville.
He was born in Knoxboro on February 27, 1922 one of fourteen children of John and Elizabeth Schumaker Vair and received his education in local schools. On August 22, 1942 he was united in marriage to the former Carrie Eychner. She predeceased him on January 15, 1975. He later married Mildred Pushler who also predeceased him on May 13, 2005. Mr. Vair began working as a young man for various farms in the area, including the Alvin Munz Farm, Augusta; and also worked for the Davie Feed Store, Oriskany Falls. He then started his own business. Robert L. Vair Plumbing & Heating Contractors, a business he operated for over 50 years until his retirement this year. He was a former member of the Morrisville Lions Club and enjoyed traveling, gardening, playing cards, professional wrestling and watching old westerns on television.
Surviving are his three daughters and sons-in-law, Audrey Gower of Morrisville; Carol Vair of Utica; Sally and Luis Salas of LasVegas, NV; three sisters and a brother-in-law, Eva Ford of Madison; Fannie and Adam Pryputnicwicz of Clinton; Daisy Spina of Oneida, a brother and three sisters-in-law Jesse (Roy) and Kay Vair of LaVista, NE; Marcia Vair of Morrisville; Barbara Vair of Canastota; his grandchildren Terrance and Lori Gower of Vernon; Jackie Gower of Bethlehem, PA; Lori Betters of Catasauqua, PA; Carol and Brian Coons of Whitesboro; Susan Maxson of Lutz, Fl; Willard and Tabethia Ackerman, Sr. of Utica; Carrie Salas of LasVegas, NV, thirteen great grandchildren and several nieces and nephews. Also surviving are his step-children, Paul and Sara Pushlar of Cazenovia; Stanley and Barbara Pushler of W. Eaton; Phillip Pushler of W. Eaton; Larry Pushler of Sherburne; Adella and Patrick Malloy of W. Eaton and many step-grandchildren and step-great-grandchildren.
He was predeceased by four brothers Charles, Thomas, John and Frank Vair, five sisters Ella Vair, Mary Jaquay, Julia Vair, Josephine Hotaling, Alice Jaquay and a son in law Frederick Gower.
Funeral services will be held Saturday, October 24, 2009 at 10:00 AM from the Burgess & Tedesco Funeral Home 31 Cedar St., Morrisville.
Friends are invited and may call Friday from 2-4 & 7-9 PM at the funeral home.
Interment will be held Saturday at 2:00 PM at the Wright Settlement Cemetery, Rome.
Contributions in his memory may be made to the Morrisville Community Church PO Box 178, Morrisville, NY 13408, or to S.E.V.A.C. PO Box 1030, Morrisville, NY 13408
To order memorial trees or send flowers to the family in memory of Robert L. Vair, please visit our flower store.