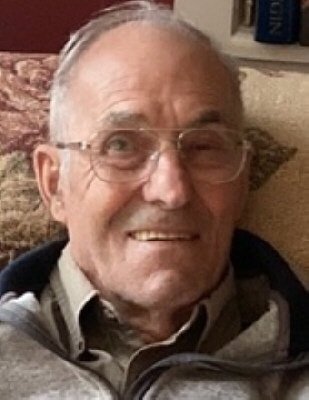 Stillman H. “Pook” Wright, 88 of Waterville, passed away Friday, May 21, 2021 at his home. He was born in the Town of Eaton on February 9, 1933 a son of the late Harold and Marjorie Houck Wright and received his education in Stockbridge Valley Schools. On March 18, 1955 in Munnsville he was united in marriage to Arletta J. Hughes. A union of over 66 years. He had worked for the Waterville Knitting Mill, was a flagman for the Utica-Rome Speedway. He made his career as a heater specialist for Agway Co., Waterville and Marcy until his retirement. Pook enjoyed his job so much, especially meeting people and helping others, that he continued in heating service following his retirement. He enjoyed playing golf but most of all being with his family and having family dinners together.
Surviving are his wife Arletta; his children, Ginny Camp of Murrels Inlet, SC, Keith and Grace Huff of Hamilton, Debra and Roger Mason of Waterville, Patricia and Paul Staskowski of Oriskany Falls, Jan and Matt Kochan of Barneveld; grandchildren, Sunday Camp and Joe Kovalick of Nashville, TN, Duane and Darles Camp of Georgetown, SC, Travis Mason of Manchester, CT, Shannon Mason and Brian Janquart of Portland, OR, Brandon Mason of Waterville, Michael and Ana Staskowski of New Hartford, Lisa Staskowski and Ryan Furrucci of Oriskany Falls, Joseph Stillman Staskowski of Greensboro, SC, Ryan Staskowski of Oriskany Falls, Nolan Kochan and Luke Kochan both of Barneveld; great grandchildren, Fisher Camp, Kadence Kovalick, Carter Furrucci; sister Barbara Thurston of Cazenovia; two brothers and a sister-in-law, David and Sharon Wright, Steve Wright; and a special nephew and his wife, Lyle and Donna Wright of Oriskany Falls, and special friends, John and Elaine Wright, of Oriskany Falls. He was predeceased by a brother Cecil Wright and a sister Marie Blau.
A Memorial Service will be held on Tuesday, May 25, 2021 at 7 PM from the Burgess & Tedesco
Funeral Home, 210 East Main St., Waterville, NY 13346. Friends are invited and may call on Tuesday from 5 to 7 PM prior to the service at the funeral home. Interment will be held at the convenience of the family.
To leave a condolence or sign the Book of Memories online go to: burgessandtedescofuneralhomes.com


To view the live stream of the service, or to view the tribute video, please click the following link: https://my.gather.app/remember/stillman-wright
To order memorial trees or send flowers to the family in memory of Stillman H. Wright, please visit our flower store.