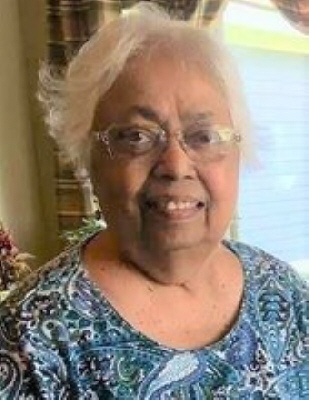 Sujatha “Sue” Arseculeratne, 87, of W. Kendrick Ave., Hamilton, NY, passed away Saturday, April 18, 2020 from renal failure with her daughter and son at her side.
She was born September 25, 1932 in Colombo, Sri Lanka, a daughter of Solomon and Violet Goonetilleke. She attended Vishaka High School and continued her education at a time when few women were going on to college. She graduated with a Bachelor’s degree from Peradeniya University in Sri Lanka. After college, she taught high school at Good Shepherd Girls School. While teaching, she was introduced by the nuns to a young building contractor named Rex who was doing a project at the school. On February 17, 1960, Sujatha married Rex F. Arseculeratne in Ratmalana, Sri Lanka. They emigrated to London, England in 1962, returned to Sri Lanka for a few years, and brought the family to the United States in 1969, settling in the Los Angeles area. Together Rex and Sujatha traveled to 50 countries, lived and worked on three continents, and continued to take new adventures together. In December 2012, they made their final move to Upstate New York to be closer to family.
Sujatha, also known as “Rani” to her family and friends, passed on to her children and grandchildren her talent for cooking and her love of plants. She was a doting grandmother and great-grandmother. She also loved to read, watch two favorite game shows, Wheel of Fortune and Jeopardy, crochet and knit, and keep up with family and friends on social media and through regular phone calls.
Sue was a communicant of St. Mary’s Church in Hamilton.
She leaves her daughter Samanthi “Sami” and her husband Duane Martinez of Hamilton, NY; her son Ruwan and his wife Cristin “CiCi” Arseculeratne of Reston, Virginia; four grandchildren: Josh (and James) of Seattle, WA, Rachel (and Tim) of Austin, TX, Zane and Maryn of Reston, VA, and great-grandson Townes of Austin, TX; two sisters, a brother and numerous nieces, nephews and cousins in the US, England and Sri Lanka; and many, many dear friends all over the world. She was predeceased by her beloved husband Rex in 2013.
Services and interment in St. Joseph’s Cemetery, Hamilton are private. Memorial services will be arranged in the future when social distancing restrictions are eased.
Arrangements have been entrusted to Burgess & Tedesco Funeral Home, 25 Broad St., Hamilton, NY.
To order memorial trees or send flowers to the family in memory of Sujatha Arseculeratne, please visit our flower store.