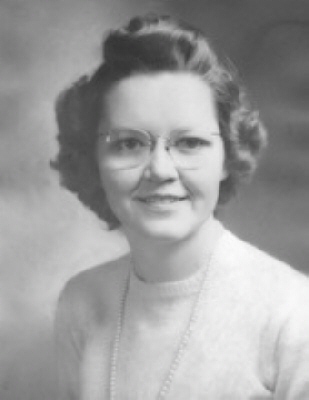 Jane Caroline Marvin Keith died peacefully in her sleep September 8, 2018, aged 99 years 11 months. She was born in West Edmeston, NY, October 3, 1918, the daughter of Jewett Lull Marvin and Jessie Eliza Holmes Marvin. She grew up in Brookfield and graduated from BHS in 1936, having designed the school crest, as part of a contest, in her Senior year. She continued her education at Cortland Normal School (now SUNY Cortland). While there, Caroline played first violin in the orchestra, and worked for the Science Department. She was among the top ten in her class, was on the President's List, and graduated in 1939.
Her first job was teaching Kindergarten at Owen D. Young School in Van Hornesville, for two years. Then she taught Kindergarten in New Berlin. After her marriage to Donald Parks Keith of North Brookfield in 1943, she took four years off to raise her first three children. In 1948 Brookfield School Principal John Grantier discovered that the district had enough 5-year-olds to start a Kindergarten. The night before the first day of school, he asked Caroline to become Brookfield's first kindergarten teacher. The next day she began what was to become a storied 32-year career. She retired in 1979, a year after the death of Donald.
In retirement she began a second life which included traveling to Europe, China, Australia, the “Holy Land”, Egypt, and the US. She presented many slide shows of her trips at retirement and nursing homes, travel clubs, and historical societies.
Throughout her life she played an active role in civic, social, and political organizations including the Girl Scouts, Home Bureau, Town of Brookfield Historical Society, the Waterville Travelers' Club, United Methodist Women, a couple’s club, the Swamp Gang, the New York State Teachers' Association, the New York State Retired Teacher Association, and Madison Country Historical Society, among others. She drove cancer patients to Upstate Medical Center for RSVP. She did the background and prep work for the North Brookfield HUD Grants. She joined the Upper Unadilla Valley Association and STOP NYRI Inc. successfully halting the planned power line through the Unadilla Valley. Caroline and Donald were founding members of the Waterville Area Volunteer Ambulance Corps, where she served on the ambulance crew. She served in many capacities in the North Brookfield Fire Dept auxiliary. She was the town historian in her 90s. She particularly loved musical theater and held season's tickets to the Stanley Theater and Glimmerglass Opera for many years. She never refused a parent's request to tutor a child when extra help was needed.
Both she and Donald had an innate love of learning for its own sake and instilled that passion in their children. She encouraged her children to participate in 4-H clubs, and the county fair. She invested countless hours of her own time and energy supporting their interests in academics, athletics and the arts, as well as taking them camping and hiking, visiting national parks, natural wonders, and great museums. She believed that an education is one's most valuable possession, and she encouraged all kids to aspire to become well educated. She was a first-generation college graduate and considered it essential that her children would all get degrees of some kind.
Caroline was predeceased by her parents, her husband, and a great granddaughter, Stephanie Rose Campbell. She is survived by her sister Esther M. Larkin {Donald); six children: Nancy J. Keith of Iowa City, IA, Bonnie K. Hill of Reno, NV, Rosalie C. Keith of North Brookfield, Virginia S. Keith of Waterville, Douglas H. and David J. Keith of North Brookfield; five grandchildren, Karen Six, Michael Jennings, Renee Speh, Curtis Bartlett and Will Bartlett; eight great-grandchildren; Colleen Cicotta, Bridget McAllister, Melissa Napoli, Joshua Jennings, Alex and Cameron Miller, Kailey and Alison Bartlett and seven great-great-grandchildren; Ryan and Stella Napoli, Julia Jennings, Madelyn and Lillian Cicotta, Devin and Audrey Bartlett-Bowles, and many nieces and nephews.
Caroline's remains will be cremated. On Saturday October 6th, a service will be held at East Hamilton United Methodist Church at 11 AM, followed by internment in North Brookfield Cemetery. Her previously planned 100th birthday party will be held as a celebration of her life at the North Brookfield Community Hall from 1 – 4 PM. All are welcome!
In lieu of a donation: Please read to a child!
Arrangements have been entrusted to Burgess & Tedesco Funeral Home, 210 E. Main St., Waterville, NY.
To order memorial trees or send flowers to the family in memory of Caroline M. Keith, please visit our flower store.