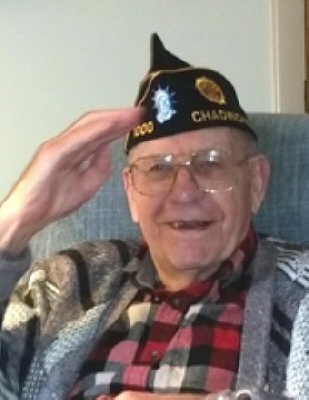 Waterville native, Elmer William Ford, 97, son of the late Linus and Sophie Tammen Ford, passed away peacefully February 16, 2020. Born May 7, 1922, he attended Paris Hill primary schools and graduated from Waterville High School. He enlisted in the Army in 1942, serving his country in wartime by safely driving soldiers, ammunition and supplies to and from the front lines of many major battles, including the invasion of Normandy and the liberation of Nazi concentration camps. When local Waterville author, Louis C. Langone included Elmer’s story of military service in his book, “The Star in the Window: Select Stories of World War II Veterans,” Elmer was humbled, honored and surprised as he never believed his story to be unique--always fully aware he was one of the lucky ones who made it home alive and uninjured, while so many others did not.
October 14, 1943, prior to being shipped overseas, Elmer married Hazel O’Neil of Sauquoit in an Army Chapel in Paris, TN. In 1945, then Corporal Ford was honorably discharged and the couple settled in Clinton, NY, where they raised five children. Elmer worked full time at General Electric in Utica for 34 years before retiring. The couple then moved to Waterville to enjoy their post-retirement years and, after 65 years of marriage, Hazel predeceased him on July 20, 2009.
A man of many talents, Elmer hand built three successively larger homes from the ground up. He enjoyed woodworking, making and repairing clocks, crafting stained glass, caning old chairs, dancing, photography and playing his accordion at family gatherings.
Deeply religious, Elmer was a communicant of St. Mary’s Church in Clinton and St. Bernard’s Church in Waterville where he helped out whenever he was needed. He delivered Meals on Wheels, was a member of the Last Man’s Club at the Edward L. Clonan American Legion Post #1000 of Chadwicks, the V.F.W., and the Chadwicks Village Elders.
Elmer is survived by his children, William Ford of Oriskany Falls; Wayne and Pamela Ford of Utica; Darlene and Randall Wentworth of Southport, NC; granddaughter Korryn Ford of New York Mills; and several nieces, nephews and cousins. He was predeceased by Hazel; sons Alan Ford and Kenneth Ford; daughter-in-law Florence Ford; and brother Leo Ford.
A Mass of Christian Burial, with military honors, was held at St. Bernard’s Church in Waterville. Interment will be in the spring at St. Mary’s Cemetery, Clinton, NY.
Arrangements were by Burgess & Tedesco Funeral Home, Waterville. Contributions in Elmer’s memory may be made to St. Bernard’s Church, 199 Stafford Ave., Waterville.
To send a condolence and sign the Book of Memories online go to www.burgessandtedescofuneralhomes.com
To order memorial trees or send flowers to the family in memory of Elmer W. Ford, please visit our flower store.