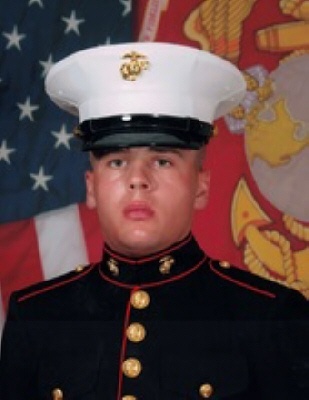 Joshua C. Trask, 31, of Scheuerman Lane, Sherburne, NY, passed away at home on Tuesday, December 1, 2020.
He was born July 5, 1989 in Johnson City, NY, a son of Jonathan R. Trask and Tammie Miner and was a graduate of Sherburne-Earlville High School. Joshua was a 3-year veteran of the U.S. Marine Corps, from 2006 to 2009, having served in Okinawa for 1-1/2 years. He was a self-employed carpenter by trade. An avid outdoorsman, Josh enjoyed hunting and fishing. He also enjoyed woodworking and metalworking.
He had been a member of the American Legion Post #876 of Sherburne.
Surviving are his companion, Rissa Moryl; his children, Krystabelle Trask, Emmalee Trask and Lincoln Maverick Ward; his mother, Tammie “Tam” Peck and fiancé Thomas Erainerd of Unadilla; father and step-mother, Johnathan and Lara Trask of Sidney Center; grandparents, Mary Trask and Sandra Calvert, both of Sherburne; his siblings, Jasmine and John Anderson of New Berlin and their children, John, Jason and Jasper Lynne; Jesse James of Sherburne; Nichole Leigh and Michael Seibert of FL and children, Damian and Dominick; Deliah M. Baker of Sherburne; step-brothers, Adham R. Coughlin of Guilford; Lewis M. Macumber of Walton; Wade A. Macumber of Sidney Center; Lorenzo Aparicio of Bainbridge and Pedro Aparicio of Vestal; several aunts, uncles, cousins and many friends. He was predeceased by his grandfathers, Charles “Butch” Trask, Richard “Buck” Calvert and James Miner.
Friends are invited to call at the Burgess & Tedesco Funeral Home, 10 S. Main St., Sherburne from 2-4pm on Tuesday, December 8, 2020.
A celebration of Joshua’s life will be held at a later date.
To order memorial trees or send flowers to the family in memory of Joshua C. Trask, please visit our flower store.