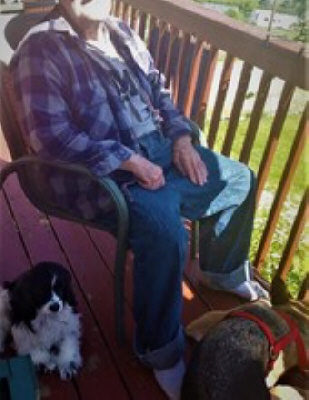 Kenneth L. Jones, 88 of Georgetown, NY passed away Tuesday, June 25, 2019 at the Crown Center Nursing & Rehabilitation, Cortland, NY.
He was born in the Town of Eaton on December 7, 1930, a son of the late Lee C. and Marion Smith Jones and graduated from Georgetown High School. On August 30, 1953 in New Woodstock he was united in marriage to Mary Perry. She passed away on March 27, 2011. Ken was a member of the Georgetown Baptist Church and a self-employed dairy farmer until his retirement in 1990. Ken was a generous person who would give his last dime to someone he thought needed it more. He enjoyed caring for and tending to the West Eaton Cemetery. Known as the “flower man” he would roam the countryside picking fresh flowers for the church. He had many friends whom he cared deeply about and loved visiting with. He will be greatly missed by all who knew him. Ken was active with the Georgetown Historical Society.
Surviving are his two daughters and three sons-in-law; Linda Hall of McGraw, Roberta and David Link of Morrisville, Douglas Chapin of FL, Daniel Skramko of Georgetown; his grandchildren and great-grandchildren, Nathan Chapin and Melissa Chapin and her children, Darren and Trenton all of FL, Megan and Alex Tumilowicz and their children, Juliana and Nikodem of Norwich, Elizabeth Foster of Rochester; Samuel and Daisy Foster of Otselic; Thomas and Chelsea Foster and daughter Abbigail, currently serving in the U.S. Marine Corps; Marc Foster of Virgil; a nephew, Stephen and Lucinda Jones and their family of Morrisville. He was predeceased by two daughters, Deborah Chapin and Julie Skramko; a grandson Aaron Scott and a brother and sister-in-law, Robert and Lydia Jones.
Funeral services will be held at 1pm Wednesday, July 3, 2019 from the Burgess & Tedesco Funeral Home, 31 Cedar St., Morrisville, NY. Interment will follow in West Eaton Cemetery. Friends are invited and may call on Wednesday from 11am to 1pm prior to the service.
Contributions in Ken’s memory may be made to the Georgetown Baptist Church, PO Box 300, Georgetown, NY 13072.
To send a condolence and sign the Book of Memories online go to www.burgessandtedescofuneralhomes.com
To order memorial trees or send flowers to the family in memory of Kenneth L. Jones, please visit our flower store.