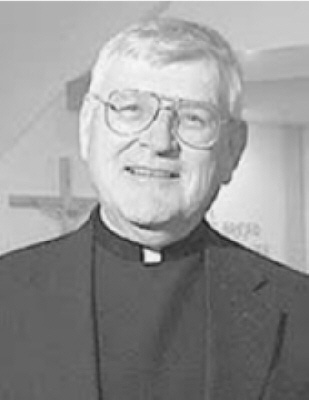 On Saturday September 4, 2021, Father Paul V. Carey, loving brother and uncle, passed away at age 78.
He was born February 16, 1943 in Utica NY, the son of Anne and Paul Carey. He attended Utica Catholic Academy. In his youth he enjoyed his role as camp counselor at Camp Nazareth on Long Lake in the Adirondacks. After studying philosophy at St. Andrew Seminary in Rochester and at Resurrection Seminary in Ontario, the Rev. Carey completed his studies at St. Bernard’s in Rochester and was ordained on May 29, 1971. He served as an associate at St. Charles Borromeo Church in Syracuse, a faculty member at Utica Catholic Academy, an administrator at St. Therese Church in Munnsville, a chaplain of Cazenovia College, and pastor at Immaculate Conception Church in Pompey, St. Paul’s Mission in Fabius, and St. Joseph Church in Lee Center.
He spent his last six years at St. Bernard’s in Waterville before his retirement in 2017. Father Carey then went on to assist Father Jason Hage with his pastoral care duties for St. Joan of Arc in Morrisville, St. Mary’s in Hamilton, St. Bernard’s in Waterville, and St. Joseph in Oriskany Falls. This past May he commemorated his fiftieth jubilee of pastoral service and was blessed to celebrate with his family, friends and many beloved parishioners.
He was passionate about travel and spent time in the Middle East and Europe embracing his Irish-German heritage. He was also an enthusiastic collector of nutcrackers from around the world. His hobbies included gardening, skiing, boating and spending time at Bradley Brook Lake with his family. He enjoyed a good meal with family, friends and fellow priests!
He is predeceased by his parents Anne and Paul Carey. He leaves his brothers Stephen Patrick Carey and wife Denise, John Carey and wife Midge and James Carey and wife Kathy. He is survived by his loving nieces and nephew; Patrick Carey (Jennifer), Collen Capezzuto (Jeff), Bridget Grieco (James), Megan Cross (Justin), Heather Machovec (Matthew) and Sonia Machovec (Kyle). He is fondly remembered for his kindness and compassion by his many great nieces and nephews: Alexandra, Aidan, Liam, James, Rachel, John, Rosie, Thomas, Peter, Ryan, Quinn, Hannah, George and Isla. He is also survived by his uncle Francis Carey and his wife Rosemary.
Family and friends are invited and may call Thursday September 9, 2021 from 4-7 at St. Bernard’s Church, 199 Stafford Ave, Waterville, NY 13480, immediately followed by a Vigil Service at 7pm.
A Mass of Christian Burial will be celebrated at St. Bernard's Church on Friday September 10, 2021 at 10am, followed by interment in St. Bernard's Cemetery. Both the Vigil Service and the Mass will be live-streamed on Facebook @Route20Catholic.
Contributions in his memory may be made to St. Bernard's Church, 199 Stafford Ave., Waterville, NY 13480.
Arrangements have been entrusted to Burgess & Tedesco Funeral Home, 210 E, Main St., Waterville, NY. To send a condolence and sign the Book of Memories online go to www.burgessandtedescofuneralhomes.com.
To order memorial trees or send flowers to the family in memory of Rev. Paul V. Carey, please visit our flower store.