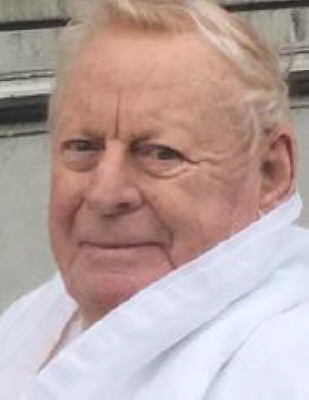 Robert P. “Robin” Jaycox, 88, of Hamilton, NY passed away Monday, September 30, 2019 at Faxton-St. Luke’s Healthcare in New Hartford.
He was born April 15, 1931 in Englewood, NJ, a son of Edwin and Lillian Weipert Jaycox. He was a 1953 graduate of Colgate University. He proudly served his country during the Korean War. On August 13, 1955, Robin was united in marriage with Jean Hamilton in Buffalo, NY, a loving union of 55 years until she predeceased him on May 24, 2005. Robin was the Director of Student Aid at Colgate University a career he cherished well past his retirement in 1993. He spoke often and proudly of “his investments”, the many, many students he helped over 35+ years. He was always active in the Colgate community, an avid sports fan. He enjoyed many activities over the years, including gardening, golf and traveling. He was also an accomplished watercolorist.
Robin was a member of the 50 Club of Hamilton and NYSFAAA.
Surviving are his son, Peter Jaycox; daughter and son-in-law, Linda and James Thatcher; grandchildren, Alexander Hamilton Jaycox and Lillian Sarah Thatcher. He was predeceased by a brother, John Jaycox.
A celebration of Robin’s life will be held at a later date and time to be announced.
Donations in his name can be given to the Colgate Silver Puck an organization that was very close to Robin’s heart: https://alumni.colgate.edu/donation/menshockeygift Or mail checks to Men’s Hockey Office, Class of 65 Arena, 13 Oak Dr., Hamilton, NY 13346.
Interment in the Colgate Cemetery will be private.
Arrangements have been entrusted to Burgess & Tedesco Funeral Home, 25 Broad St., Hamilton, NY.
To order memorial trees or send flowers to the family in memory of Robert P. Jaycox, please visit our flower store.