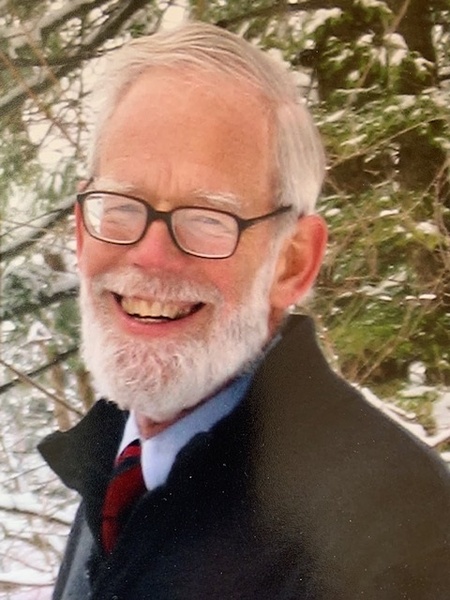 William “Bill” Collins Todd of Hamilton, NY, passed away on April 24, 2022, at Crouse Community Center in Morrisville, NY.
Bill was born in Hamilton on February 15, 1940, to the late Grenavere “Gwen” and Robert “Bob” Todd. Bill was the eldest of three children, sisters, Jane Todd, who resides in Hamilton, and the late Catherine Todd. Bill graduated from Hamilton Central School in 1958 and enlisted in the U.S. Army in 1959; he was stationed in Germany. After his service, he enrolled at Syracuse University. Upon graduation, Bill moved to the San Francisco Bay Area in 1968, where he met his future wife, Carolyn Smart Todd, in 1972. Bill and Carolyn met folk dancing, which was a favorite pastime of theirs. Bill worked as a geologist at the U.S. Geological Survey in Menlo Park, CA, for 7 years, where he traveled to Alaska for research projects. Bill later transitioned his career to real estate appraisal and retired in 2000. Bill and his family moved back to Hamilton, NY, in 2000 into the house where Bill grew up.
Bill is survived by his wife, Carolyn, his daughters and their partners, Katie Todd and Craig Leslie of Charleston and Chloe Todd and Ben Ambrose of Denver, sister, Jane, and three beloved grandchildren, Maggie, Rose, and Leo.
As a hiker and backpacker, Bill was a lover of the outdoors, a devoted environmentalist, and a political advocate in his community. Just a few years ago, you would see Bill at the Hamilton Farmer’s Market sitting at the Democratic Party booth registering new voters, campaigning for local politicians on the upcoming ballot, or discussing his conservation pursuits as a board member of the Southern Madison Heritage Trust. Bill was a lifelong music enthusiast, enjoyed motorcycle riding, bicycle riding in later years, and especially loved a family trip to Australia and New Zealand in 1994. Bill had strong convictions, which led to lively conversations. He loved his wife and daughters dearly and will be greatly missed.
Bill’s family is planning a Memorial Service at the First Baptist Church in Hamilton, which has been the Todd Family church for over 75 years. The service will be held at Sunday, September 25, 2022 at 2:00 p.m. followed by a reception in the church Fellowship Hall.
In lieu of flowers, please consider donating to the Southern Madison Heritage Trust, P.O. Box 117 Hamilton, NY 13346 or the First Baptist Church of Hamilton, 27 Broad Street, Hamilton, NY 13346.
Arrangements have been entrusted to Burgess & Tedesco Funeral Home, 25 Broad St., Hamilton.
To order memorial trees or send flowers to the family in memory of William C. Todd, please visit our flower store.